So happy to share my new song and video with you all.  The first studio recorded song from Darren Jay and The Delta Souls since 2012 is now here!  Memphis Train A Comin’ is written and recorded by Darren Jay and pays homage to Memphis, Tennessee, the Delta and the blues that resonates and has influenced him since he made it his home in late 2009.

As a thank you to all those who support me, the Blues and original music in general I am putting the song here as a FREE DOWNLOAD.  Enjoy and leave comments if you like the song! 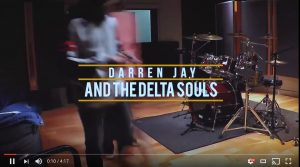