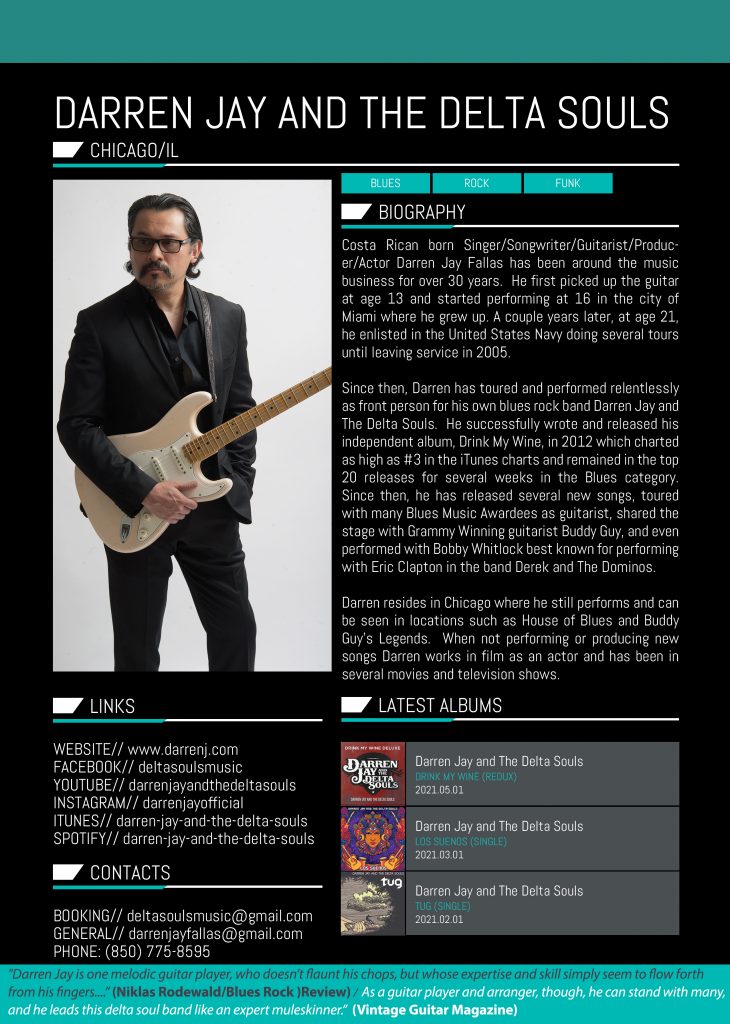 “This rollicking, foot-stomping mix of guitars, horns, sax, bass, keyboards, and drums just drips Memphis barbecue sauce and all of the great blues from that city, even though the majority of it is written by a relative newcomer. Jay’s out front with some killer riffs and sassy solos to go along with gut-driven vocals… You’ll have to wait if you’re hoping to see him on tour. He’s deployed in Kuwait as a Navy reservist, and is scheduled to return in December. No sense waiting until then to salute this very fine album.” (Tom Henry/Toledo Blade)

“”Drink My Wine” truly is not only the finest music out of Memphis in a long time, it is also one of the very finest Blues releases for 2012, hands down. “Drink My Wine” ethusiastically receives my Highest Rating of 5*****.” (John Vermilyea/Blues Underground Network)

“there’s a lot of good music here. It’s loose, but tight. It’s enthusiastic. What’s more, it’s put together by a bunch of musicians who know what they’re doing… Jay shows quite a flair for putting together an album full of tracks with lots of instrumental juice and vocal strength. It’s a fine first outing..” (Jim White/Pittsburgh Post-Gazette)

“Featured Blues Review 5 of 6 – Jay is an engaging singer and a guitarist with chops to spare…Darren Jay & the Delta Souls can take a lot of pride in this release. They offer up a varied program that features earnest original tunes performed with the expertise you would expect from a band of veteran Memphis musicians…solid effort…” (Mark Thompson/BluesBlast)

“Fronting a tight band of Memphis-based players, ‘Drink My Wine’ wastes no time in tearing it up. The opening instrumental, ‘Rider’ puts the foot down on the accelerator and never lets up. With a smoking, electrified rock groove this cohesive band raises the roof. Jay’s guitar lead is audacious and crisp. The rhythm section of Laura Cupit (bass), Hubert “H Bomb” Crawford and Tony Thomas (organ) stay connected through tempo brakes and rolling grooves… The title cut smokes with the quartet jamming hard, until a slow-burning time change that segues back into the main flow. This music is not subtle and is made to be blasted at high volume. When you listen to the hooks on “Lovin’ Man” getting swept away in a dancing frenzy is a possibility…Darren Jay is not trying to reinvent the Memphis sound. He is a messenger, and ‘Drink My Wine’ comes across loud and clear. (Robbie Gerson/Audiophile Audition)

“…I can’t help but like this one a lot…I very much enjoyed ‘Drink My Wine’ and it deserves to be listened to. I look forward to hearing what is next for Darren Jay & the Delta Souls.” (Phillip Smith/BluesWax)

“Drink My Wine is a great piece to showcase what has got to be one of the hottest bands on the Memphis Blues scene in ages…This band is tight, the musicianship is flawless and the album has a sound that is both timeless and really easy on the ears. They play with a passion seldom attained by most, making them one of those rare bands that has what it takes to grab their audience and hold them through the night. Darren Jay is a superb guitarist, a fact that is highlighted in that the band is solid enough to give him the freedom to do his thing. A band leader can only be as good as his backing band. The result is as powerful as it is beautiful… It will be nice to see where they go next. ‘Drink My Wine’ is one of those pieces that will be hard to follow up.” – (Bill Wilson/Billtown Blues)

“At times Darren Jay’s guitar tones are very bright, reminding me a little of Junior Watson, and the exemplary back end bass provided by Laura proves to be a good foil to his guitar…I’ve thoroughly enjoyed Drink My Wine…an excellent disc.” (Kyle Deibler/BluesBytes)

“…the debut release for this blues-rocking Memphis band…Blues boosters will really dig this disc.” (Ricky Flake/Sun-Herald)

“This Memphis based band has captured the soul sound of the area…a tight clean Memphis Soul sound that is anchored by Laura Cupit’s bass and Darren Jay’s guitar. At times he lets it really rip and there is some very inventive and interesting guitar playing. There are a number of guests that help flesh out the sound, and they are headed by Wayne Jackson of the Memphis Horns on trumpet, also Rodd Bland, son of the legendary Bobby Blue” Bland, plus Art Edmaiston, Marc Franklin and Chris Cloys. These just add a little whipped cream to the dressing, as the sound is rich and full even without them. A solid disc that makes me want to hear the next one.” (Bob Gottlieb/Folk & Acoustic Music Exchange)

“If you love ‘Memphis Blues’ and who doesn’t, a new CD released on September 18, 2012 is for you…This is a superbly produced Blues CD showcasing great guitar licks, soulful lyrics and some of the best Blues sidemen in the country.” (Robert Nicosia/Music Man Blog)

“Throughout, Darren Jay demonstrates a deft touch on guitar mixing blistering leads with subtle rhythm flourishes and wide ranging dynamics. Check out Drink My Wine for not only a taste of the grape but for a compact sample of his wide ranging guitar skills. He’s also a decent vocalist with an easy, unforced vocal style that matches the varying musical backdrop with just enough grit to compliment the music but never force it completely into the background… If you like guitar driven blues but need a little more spice than the typical three piece blues band diet has to offer, you will find much to like here.” (Mark Smith/Music Revue)

“There’s not much Memphis blues traveler Darren Jay can’t do, as his varied, deeply absorbing ‘Drink My Wine’ makes abundantly clear…Darren Jay’s sound is close, right up front, and so hot your eyebrows are nearly singed…high-spirited, deep-grooving…heart-felt, deeply satisfying. (Nick DeRiso/Something Else! Reviews)

“‘Drink My Wine’ is a matchless album by Darren Jay & the Delta Souls. There is a slow earthly sorrow, to rough for pop radio but a surefire monster on some distant blues planet. with its rusted, aching piano, powerful bridges and ravaged vocals.” ( John Shelton Ivany/jsitop21.com)

“Darren Jay is one melodic guitar player, who doesn’t flaunt his chops, but whose expertise and skill simply seem to flow forth from his fingers, a sign of musical maturity for this relatively young musician – or should I say wine-crafter. And with this release, he has packaged some of his best Rieslings, Chardonnays and even some unique creations that are a bit more unusual and rare. Jay’s influences come from every area where good musical wine is made: Memphis, New Orleans, Chicago and Texas. Yet, he masterfully blends each of these influences…Jay’s absolute masterpiece, one that will stand the test of time, is ‘Tin Pan Alley.’ But be prepared; it isn’t for the faint of heart. Rather, it blends dirty saxophones with powerful guitars and heart-wrenching vocals in a way that you have never heard before…Like a good wine, every track on this album has multiple layers of flavor. Jay’s vocals are seductive, at times sweet and comforting, and at times edgy and rough. His guitar is melodic, but serious. But it all blends into a fine wine. Each song has transition, each song creates a number of different vibes before, like the last sip of a strong red, ‘Drink My Wine’ leaves the listener fulfilled and eager to pour another glass.” (Niklas Rodewald/Blues Rock Review)